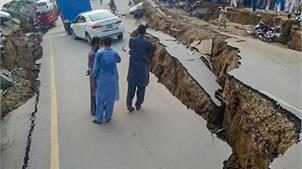 Islamabad, Sep 24 (PTI) At least two people were killed and more than 100 others injured in Pakistan-occupied Kashmir on Tuesday after a 5.8-magnitude quake jolted several cities in the northern parts of the country including capital Islamabad.

According to the US Geological Survey, the epicentre of the quake was near New Mirpur in Pakistan-occupied Kashmir.

PoK Minister for Sports, Youth and Culture Chaudhry Mohammad Saeed told the media that at least two people have died and over 100 injured in different parts of Mirpur district.

Pakistan Meteorological Department’s earthquake centre said the 5.8-magnitude earthquake was located near the mountainous city of Jehlum in Punjab province. Its depth was at 10 kilometres. However, Minister for Science Fawad Chaudhry said that the intensity of the quake was 7.1.

Some houses collapsed in Mirpur following the earthquake, Deputy Commissioner Raja Qaiser said. Parts of a mosque also collapsed in the area, which is severely affected by the quake. Emergency has been declared in hospitals across PoK.

TV channels showed the footage of heavily damaged roads in Mirpur, with many vehicles overturned. Several cars fell into the deep cracks on the roads.

The quake was powerful and created panic as people ran out of the building, eyewitnesses said.

Pakistan Army chief General Qamar Javed Bajwa directed “immediate rescue operation in aid of civil administration” for victims of the earthquake in PoK. Army troops with aviation and medical support teams have been dispatched, the media wing of the army tweeted.

Lt. Gen. Muhammad Afzal, chairman of the National Disaster Management Authority, said that most of the damage was done in Mirpur and Jhelum.

“We are assessing the damage to life and property,” he said.