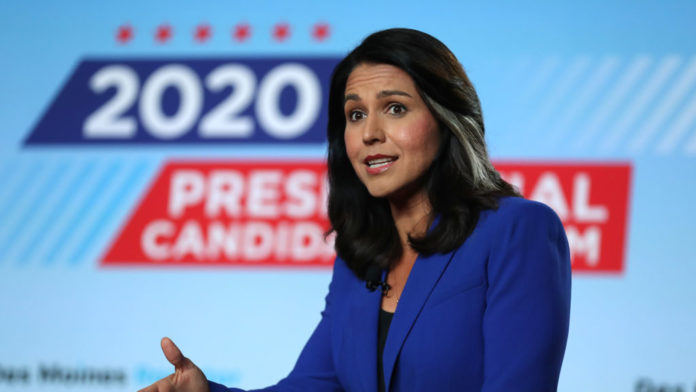 Tulsi  Gabbard is the first Hindu member of the United States Congress. She is an American politician who is a member of the Democratic Party. Recently, Gabbard became the first female combat veteran to run for the presidency. She is a war veteran and has served duty twice in the Middle East. Currently, Congresswoman Tulsi  Gabbard stands to be a major in the U.S. Army National  Guard. She has served in the Foreign Affairs Committee and the Armed Services Committee for over six years; during which she has been intimately involved with issues about national security.

At the age of 21, Tulsi Gabbard became a part of the Hawaii State Legislature and further went on for two deployments as a soldier in the Hawaii Army. She is currently serving as a United States Congresswoman running for president for the 2020 presidential elections. Tulsi Gabbard is extremely outspoken about the need for change like wars. Therefore, she aims at putting an end to the wasteful wars and commits to protecting the planet and strengthening domestic affairs.

She has been the talk of the hour at both national and international levels for her enigmatic presence and calm demeanor. Her views are centered on ideas of peace and development which are receiving much appreciation

Here are few strong reasons as to why Tulsi  Gabbard should win the Democratic nomination and presidential election in 2020:

Gabbard entered politics at a  young age and at age 21 went on to become the youngest person to be elected to the Hawaii State legislature. She Served in the House of Representatives as well as the US Senate. Tulsi was a member of the Honolulu City Council before serving in the House of Representatives. She served all these posts with integrity and gathered expertise and experience over the years to be able to stand at an educated position to act as the commander in chief of the nation.

Tulsi Gabbard joined the Hawaii Army National Guard in 2003. She served for two tour duties in the Middle East. During her deployments was exposed to combat zones in Iraq and Kuwait. Tulsi is the first woman to be adorned with honors from the Kuwait National Guard. He meritorious service earned her several laurels and adequate exposure to understand the affair of wars. Tulsi Gabbard recognizes the massive economic and social destruction wars are capable of bringing and thus gravitates towards the notions of peace and harmonious co-existence.

Gabbard’s approach is an active form of adjustment which she intends to bring to the country. Gabbard actively carried out several measures like meeting with Syrian dictator Bashar Al-Asad in 2017 to bring form the cause of peace. She has strong stands on the foreign policy and opposes the regime change wars. She believes that Trump’s strategy of governance has proved to be counterproductive on various fronts. Gabbard thinks voting him out speaks more than an impeachment since the entire nation should come to understand what is needed to drive them to sustenance and stability.

Tulsi  Gabbard firmly believes that divineness and partisan politics should take a back. Therefore, she has been focusing on the more important issues impacting America. She is known for her brave acceptance of evolution in opinions about LGBTQ rights. Tulsi Gabbard is a supporter of same-gender marriages and showed her support towards transgender military troops. Her progressive and adaptive nature is what compels the world to believe in her ability to hold the strong position of President in 2020.

Conclusion – The case for Tulsi  Gabbard 2020

Thus, Tulsi  Gabbard is a promising chance for the national political scenario. Her modern and upright stand demonstrates that she isn’t afraid of taking strong actions when the situation calls for it. She isn’t merely an excellent spokesperson, her ideas have the ability to significantly impact change in the nation. With Tulsi Gabbard finally refocusing resources for the welfare of the people, she can steer the country in a different direction. In all her strong stands and peaceful measures, she indeed stands a strong chance of emerging as the president in 2020.