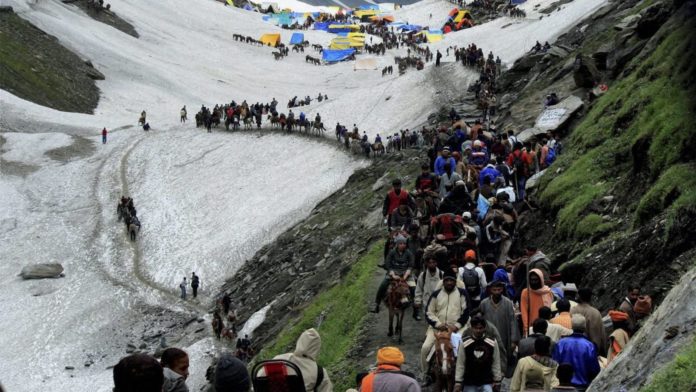 Paradise is an illusionary term which is often used to express the tremendous Possibility of Peace and delight. The Indian state of Jammu & Kashmir is  termed as “Paradise on earth” is geographically located in the Northern Part of India and this Valley is 1850 metres above the sea level. The Valley is connected with Indian History which dates back to Pre-Historic Era. Because of certain elements, the Kashmir lost its Identity and Culture in due process of time.

THE FORGOTTEN HISTORY OF JAMMU & KASHMIR :

The Kashmir Valley is evolved from Satisar lake, which is also confirmed by Geologists. According to Mythology, this Valley is named after Great sage Kashyap Muni [ Kashyapmar] which means lake of Kashyap muni. This name was later changed to Kashmar and at last the “Kashmir”.
It is also learnt from many scriptures that Kashmir has been a centre of “Shaivism”. Adi Shankaracharya, the great sage and Philosopher who travelled from down south to North and tried his best to make people re-impose their faith in Vedic scriptures visited this valley around 9th Century. The Nilmata Puran signifies the holy shrine Amarnath. Not only the mentioned Places but also every nook and corner of Kashmir has its own Identity, which is now a lost one.

WHAT HAPPENED TO THE PARADISE THEREAFTER?

During the process of decolonisation, British India was bifurcated into 2 Nation-states India and Pakistan namely. The bifurcation of Nations was the result of Jinnah’s Communal Politics and other minor incidents happened during Independence struggle. Jammu & Kashmir was a small Kingdom ruled by Hindu Dogra ruler Maharaja Hari Singh who wished to remain neutral but the advancing forces of Pashtoon tribes and Pakistan Army forced King to accede the Territory to India. A Part of Kashmir was occupied by Pakistan Army and was advancing further which was blocked by the Indian Army and made them hold their foot back. But again Nehru, Played diplomatic cards which further garnered more Complex Problems for India[ The decision to take this issue to United Nations and file a complaint with United Nation Security Council]
The consequences lead to the birth of Article 370 and Article 35A in the Indian Constitution. Many Politicians were against this move especially Syama Prasad Mukherjee is very vocal critic about this move and fought till his breath.

WHAT HAPPENED TO PARADISE IN 1989?

As expected by many statesmen the disturbance started in Kashmir in a short time. Insurgency in Jammu & Kashmir was in peaks during 1989-1990 during which Separatist forces Killed several Government Officials and Spies to paralyse the administration and then pressurise the Government of India. The religious places were misused to create fear among Minorities especially Kashmiri Pandits supported by ISI and Pakistan Army. Thousands of Kashmiri Pandits were Killed and made them vacate their places. The slogans used during their so called protest were very communal and filled with hatred like:
1) Zalim O, Kafiro, Kashmir Hamara chhod do [ Ye cruel kafirs, vacate our kashmir]
2) Kashmir kya Banega – Pakistan [ what will Kashmir be – pakistan]

The JKLF and separatist had an outstanding Influence on Young Kashmiri Minds which always supported Pakistan and strived for Azad Kashmir. The demography was drastically influenced by their activities. The Population of Hindus went down from 400,000 in 1990 reduced to just 2,000 in 2016. The separatist forces acted as Parasites and blocked the development of Jammu & Kashmir which unfortunately included Ladakh also.

August 5th has given sleepless night for Separatist forces, Major Political Parties of Valley ( National Conference and PDP) and Many Intellectuals. Before Placing this Bill In Rajyasabha GOI sent 20,000 troops to the Valley to maintain Law and Order. Union Home Minister Amit Shah had given some fiery speeches in both the houses of Indian Parliament. Every Political party expressed their views in the house. There were heated arguments between Amit Shah and Adhir Ranjan Chowdhary,leader of opposition where the latter spoke against this bill and the former supporting this bill. In the heated exchange of words, Ladakh MP Jamyang Tsering Namgyal has drawn Nation’s attention. He used his exemplary oratory skills to destroy the opposition and schooled his fellow mates with certain Political, geographical, social aspects about Ladakh and emerged as a hero of the day. The appreciations followed him all through the day.

REACTION OF KASHMIRI PANDITS AND THE WHOLE NATION:

Kashmiri Pandits all over India and Abroad expressed their gratitude towards government and hailed the bold decision. In precise every common citizen of this nation welcomed this step but few expressed their concerns for local Kashmiri Youth, a valid concern though.
The Self-claimed Intellectuals followed their usual words stating Government move Undemocratic and allegedly criticised government as Fascist government.

As soon as the Government took this decision Pakistan flexed muscles to take on Indian government in International Platform like United Nations. India repeatedly said that “It was an internal matter” and stuck to its views till the end. Few are happy and few aren’t with this decision. But surely Kashmiris will be benefitted with this move. It is time for Kashmiris to leave the stones and pick Books to make sure Paradise lives in peace and ensure that Kashmir becomes a very happening place for every tourist who wants to seek asylum in Paradise to break his/her daily routine and enjoy the beauty only to fall in love with Kashmir again.But this will be a reality only when Our Kashmiri brothers and sisters start showing attitude of Hospitality and not a hostile one.

“Amit shah started the match and Syed Akbaruddin ended the match with swag who destroyed biased media at UN.