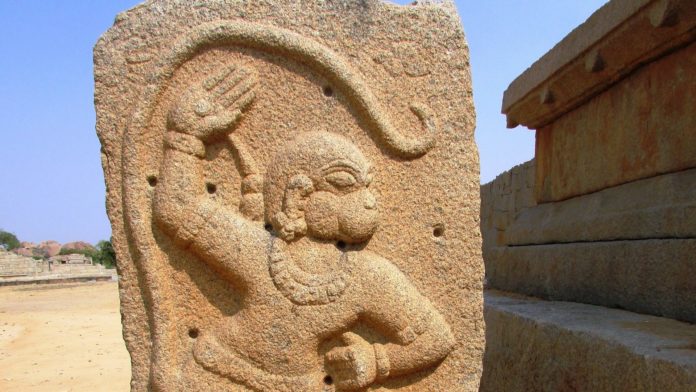 Hanuman is one of the most popular gods of Hinduism who played an important role in the incarnation of Lord Rama proved himself as his greatest devotee.

He is also mentioned in the Mahabharata and some Puranas and Jain texts. He is variously described as an incarnation of Indra, Vayu and Shiva. People from all wakes of life worship him and admire him for his strength, humility and valour.

As a devotee of Lord Rama, he became very popular for his devotion and great qualities. Like Ganesha he commands respect and veneration from children and elders alike. Anyone who is familiar with the Ramayana, cannot but appreciate his divine nature and super human personality, shaped by the strength of celibacy, humility, selflessness, unsurpassed devotion, determination, fearlessness and an extraordinary commitment to work for the divine.

Sita found in him a friend, a son and a loyal servant. Impressed by his loyalty and commitment to the cause of Rama, she blessed him to remain immortal in his existing form till the end of creation and help the loyal devotees of Rama.

People believe that he is very much active on earth even today. Wherever the name of Rama is uttered or chanted, Anjaneya said to go there and become an invisible part of the scene.

People pray to him for courage and confidence, freedom from sorrow and for protection against evil spirits and bad luck. Hanuman is a terror to evil forces. Because of his intense purity and devotion they are afraid to appear anywhere near him

Hanuman is one of the most celebrated and worshipped figures in Indian religion, but mention him outside of India and you are likely to be met with a blank stare. So who is Hanuman and what does he represent to the Hindu faith?

As is the case for many of India’s gods, several stories are told explaining Hanuman’s origin. In one interpretation Shiva and Parvati decide to transform themselves into monkeys and indulge in amorous games in the forest. As a result Parvati becomes pregnant. Shiva, conscious of his godly responsibilities and desiring to conform to the laws of nature, directs the wind god Vayu to carry the offspring from Parvati’s womb to that of Anjana – an Apsara with the form of a monkey who has prayed to be granted a boy child. In another version of the story Hanuman is simply the offspring of Anjana and Vayu. In yet another version of the story, he is the son of the King and Queen of the Monkeys.

Many stories are also told of Hanuman’s childhood. As the son of Shiva and a monkey-like god, Hanuman is variously described as spirited, restless, energetic and inquisitive. One point all the major texts agree on is his mischievous nature. As a youth Hanuman often abused his powers to pester the saints and holy men living in a nearby forest, with tricks such as beard pulling and the dousing of sacred fires. However, it is as an adult that the monkey god Hanuman comes into his own.

Because of his bravery, perseverance, strength and devoted service, Hanuman is regarded as a perfect symbol of selflessness and loyalty. Worship of Hanuman helps the individual to counter the bad karma borne out of selfish action, and grants the believer fortitude and strength in his or her own trials during the journey of life. Hanuman is also invoked in fights against sorcery and protective amulets depicting him are extremely popular among his devotees.

One thing that Hanuman taught me is:

“Strength should not be trifled with; neither should it be something to be vain of”