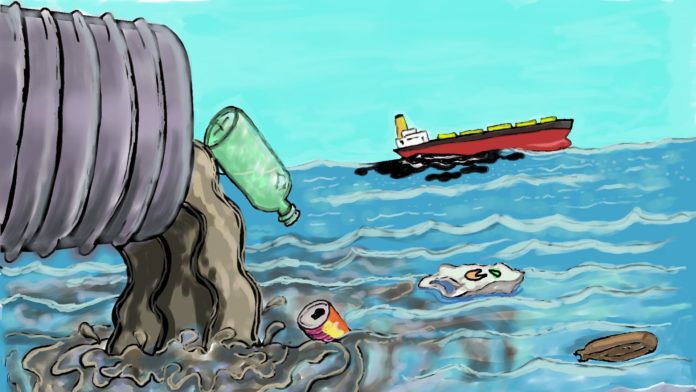 The hole in the ozone layer above the North Pole is becoming larger, allowing large volumes of ultraviolet radiation to fall directly on the Earth’s surface, causing destruction and harm to humanity, and resulting in skin cancer and other bodily ailments. At the same time, it reduces the rate at which green plants photosynthesise, thereby reducing oxygen content in the atmosphere.

This has extreme negative effects on the Earth. Health organisations all over the world are continuously researching on ways of reducing such harmful effects on humanity. In a direct attempt to address the issue, many are actively looking into the effects of radiation, and taking measures to rectify the situation, such as through modifying the coolant compartments in automobiles and refrigerators, and setting up new guidelines for certain products.

The emission of pollutants and toxic gases into the atmosphere has resulted in chemical reactions, which cause acid rain. Acid rain damages the environment by, for example, corroding the metals we use in car doors and buildings. It also harms human health; the first sign of prolonged exposure to acid rain is the onset of skin ailments.

Many of the agricultural products, which we consume regularly, are sprayed with chemical pesticides that are harmful to humans. Some of these products may reach the consumer before an interval of time that is necessary for them to be safe and fit for human consumption. Consumers may unwittingly purchase these quick-to-the-market agricultural products, still tainted with chemicals, and expose their family to the harmful effects of these pesticides. Prolonged accumulation of these chemicals can cause irreversible damage to our health.

with chemical pesticides that are harmful to humans. Some of these products may reach the consumer before an interval of time that is necessary for them to be safe and fit for human consumption. Consumers may unwittingly purchase these quick-to-the-market agricultural products, still tainted with chemicals, and expose their family to the harmful effects of these pesticides. Prolonged accumulation of these chemicals can cause irreversible damage to our health.

4. The Contamination of Western Medicine

Frequently, we see a new phenomenon. Whether is it among a family member or in the office, as soon as someone catches a cold or cough, it will inevitably spread quickly to someone else. Besides the highly contagious nature of the virus, the body’s low resistance to viruses also plays a part. The abusive use of antibiotics has resulted in viruses’ resistance to medicines as well as deterioration of the human body’s immunity system. The rates of contagious diseases are thus on the rise.

Rapid worldwide industrialisation has increased the daily emission of toxic waste and gases. Vehicle exhaust fumes and dust are increasingly trapped in our environment and this is exacerbated in densely populated cities where smog blankets and traps polluted air.

The harmful effects of nicotine found in tobacco smoke are well documented. Passive smokers who are exposed to tobacco smoke in public places can also suffer from the same ill effects as smokers themselves – lung diseases, damages to our brain cells, heart problems, strokes, poor blood circulation and high blood pressure are some of the more well known illnesses associated with tobacco smoke.

On average, we spend 80% of our time indoors. The high cost of living and pressure for space have resulted in smaller living areas, with a higher tendency of congestion and poorer ventilation. Coupled with an enclosed indoor environment, these living conditions often come with pollutants such as cigarette smoke, dust, fungi and spores, droppings from dust mites, chemicals from photocopying machines and construction materials (glue, paint) and smoke from cooking. Sustained exposure to these elements can cause cancer, respiratory ailments such as asthma, hypersensitive rhinitis, hypersensitive dermatitis, and deterioration of the immune system.

Research reveals that cooking a meal is equivalent to smoking six cigarettes. Although the proportion of women in China who smoke is small, the mortality rate of these women who suffer from pulmonary diseases is high. Epidemiologists suggest that there is a strong correlationship between this and the inhalation of smoke and oily fumes while cooking.

Prolonged inhalation of carbon dioxide in an enclosed or badly ventilated office can result in fatigue and lack of concentration among office workers. Fatigue felt after a long journey in the car is also similarly caused by poor circulation of air where there is insufficient oxygen to replace the carbon dioxide.

It is essential to clean the filters of all air-conditioning systems regularly, be it centralised or single units. Filth in the units will lead to the growth of micro-organisms which will flow into the room through the inlet duct when the air-conditioner is switched on. Many cases of asthma today is closely related to allergy to these micro-organisms.