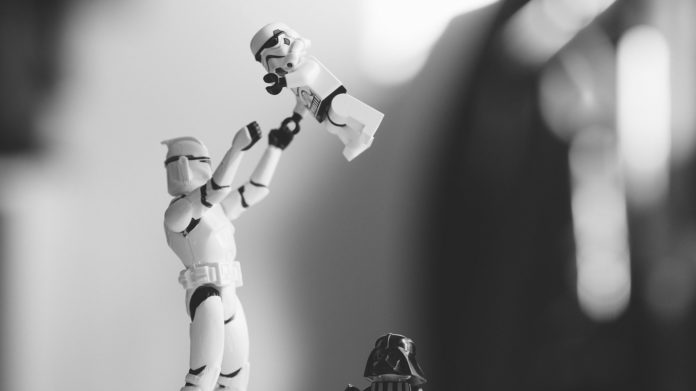 Passholders scurried around the bigger-than-life Millennium Falcon spaceship – home of the Smugglers Run ride – and they queued up to buy lightsabers, to try the mysterious blue milk of “Star Wars” lore and to gain entry into Oga’s Cantina. They took pictures with droids and assorted film characters and took in the details built into the planet of Batuu, site of Galaxy’s Edge and a product of Walt Disney Imagineering’s imagination.

He and Ashlyn Holland praised the detailed theming of the land, which has a mix of futuristic and makeshift elements in a stark, hard-edged atmosphere. Visitors in Batuu’s Black Spire Outpost cannot see beyond its borders, not even into the neighboring Toy Story Land, where an entrance to Galaxy’s Edge eventually will be opened. They also praised the role-playing interaction with characters brought to life by Disney employees.

The Hollands also rode Millennium Falcon: Smugglers Run, which Disney says allows visitors to navigate the famed vessel from the films. Posted wait times ranged from 45 minutes to 1 hour on Saturday morning. The event was reserved for passholders of “platinum” or higher status who signed up for a specific four-hour slot to explore the land. Disney workers and friends have been visiting Galaxy’s Edge throughout the month, and more previews will continue in the days leading up to the Aug. 29 grand opening.

On Saturday, Christopher and Andy Kraus tried the blue milk – they think they detected mango in there – rode Smugglers Run and bought souvenirs, including a space monkey sort of creature that sat on Christopher’s shoulder.

“My coworkers were thinking we were crazy for going today,” Christopher Kraus said. “But the way they [Disney] set this up and timed it out and whatever they were doing, they did a good job of that because I don’t feel like I’m rushed at all.”

They said have future reservations for Oga’s Cantina, but they might come back for the grand-opening day, too.

“We might leave that for the super-fans,” Andy Kraus said.

The Hollywood Studios land is a near duplicate of the Galaxy’s Edge that opened in California at Disneyland in May. Both coasts will be getting an additional ride for the land called Rise of the Resistance. It is scheduled to open in Florida on Dec. 5 and in California in January.

Veronica Shortino and Chris Garrison, passholders from New Jersey, were able to get Galaxy’s Edge entry during their visit to Disney World. They also rode Smugglers Run twice, using the single-riders option, where operators fill all seats using folks who don’t mind riding without their companions.

“I thought it was great,” Garrison said. “I don’t do rides, but it wasn’t too bad.” The Smugglers Run attraction assigns roles to each rider to perform a simulated mission to rescue shipments of a valuable energy source.

“I thought it was nice, being that I’m not a ‘Star Wars’ fanatic, yet you still feel embraced in the world,” Shortino said.

Would she return to Batuu after Aug. 29?