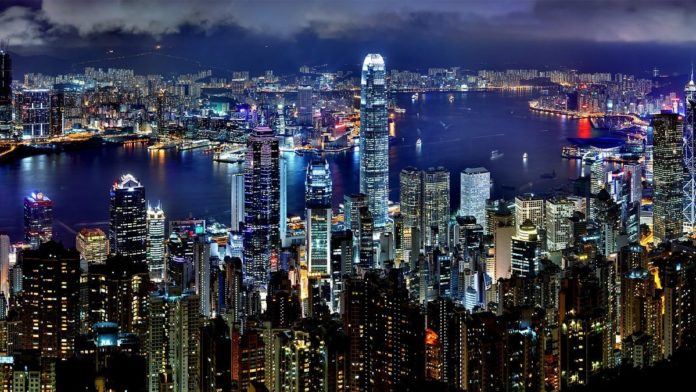 HONG KONG (Reuters) – Police and protesters clashed at Hong Kong’s international airport on Tuesday after flights were disrupted for a second day as the political crisis in the former British colony deepened.

In Washington, U.S. President Donald Trump said the Chinese government was moving troops to the border with Hong Kong and he urged calm.

Trump said the situation in Hong Kong was tricky but he hoped it would work out for everybody, including China, and “for liberty” without anyone getting hurt or killed.

Demonstrators who have been protesting for the past nine weeks against Beijing’s growing influence in the special administrative region targeted the international airport for a second day on Tuesday.

Scuffles broke out in the evening after an injured man was held by a group of protesters. Some claimed he was an undercover mainland Chinese agent and initially refused to let him leave.

Medics, however, bundled him onto a stretcher and forced their way through jeering throngs to an ambulance.

Several police vehicles were blocked by protesters and riot police moved in amid chaotic scenes, using pepper spray to keep people back. A policeman pulled out a gun at one point.

Protesters also barricaded some passageways in the airport with luggage trolleys, metal barriers and other objects. Others clambered onto check-in counters as the protesters appeared to control part of the airport for a short while. At least two protesters were taken away by police.

Another mainland Chinese man was held and tied down by protesters at the airport after they thought he was posing as a reporter. The editor-in-chief of the state-run Global Times newspaper, Hu Xijin, tweeted that the man was a journalist with the paper. He was later taken away by ambulance.

The situation calmed down after a few hours without the violence worsening, and the crowds thinned out. Local media reported that an injunction had been issued by a local court to clear the airport of protesters.Riot police arrive to the airport during a mass anti-extradition bill demonstration in Hong Kong, China, August 13, 2019. REUTERS/Tyrone Siu

The action followed an unprecedented shutdown of the airport on Monday. Hong Kong’s Airport Authority said operations had been “seriously disrupted” on Tuesday and departing passengers had been unable to reach immigration counters.

The weeks of protests began as opposition to a now-suspended bill that would have allowed suspects to be extradited to mainland China and have swelled into wider calls for democracy.

Demonstrators say they are fighting the erosion of the “one country, two systems” arrangement that enshrined some autonomy for Hong Kong since China took it back from Britain in 1997.

The increasingly violent clashes between police and protesters have roiled the Asian financial hub. Hong Kong’s stockmarket fell to a seven-month low on Tuesday.

PUSHED INTO THE ABYSS

Chief Executive Lam made an appeal for calm and restraint.

“Take a minute to look at our city, our home,” she said,

her voice cracking, at a news conference in the newly-fortified government headquarters complex.

“Can we bear to push it into the abyss and see it smashed to pieces?” she said.

Demonstrators want Lam to resign. She says she will stay.

The events present Chinese President Xi Jinping with one of his biggest challenges since he came to power in 2012.

Hong Kong legal experts say Beijing might be paving the way to use anti-terrorism laws to try to quell the demonstrations. On Monday,Slideshow (7 Images)

Britain, a guarantor of the agreement that transferred Hong Kong to China in 1997, on Tuesday condemned the violence and urged dialogue.

“Concerning to see what’s happening in Hong Kong and the worrying pictures of clashes between police & protesters at the airport,” Foreign Minister Dominic Raab said on Twitter.

“I think paralysing the airport will be effective in forcing Carrie Lam to respond to us…it can further pressure Hong Kong’s economy,” said Dorothy Cheng, a 17-year-old protester.

Despite the trouble, some flights were still scheduled to take off early on Wednesday morning with some tourists still waiting in the departure hall and dining areas, according to Reuters journalists in the airport.

Some passengers challenged protesters over the delays as tempers began to fray.

Flag carrier Cathay Pacific said flights might still be cancelled at short notice. The airline, whose British heritage makes it a symbol of Hong Kong’s colonial past, is also in a political bind.

China’s civil aviation regulator demanded that the airline suspend staff who joined or backed the protests from flights in its airspace, pushing the carrier’s shares past Monday’s 10-year low.

Other Chinese airlines have offered passengers wanting to avoid Hong Kong a free switch to nearby destinations, such as Guangzhou, Macau, Shenzhen or Zhuhai, with the disruption sending shares in Shenzhen Airport Co Ltd (000089.SZ) surging.