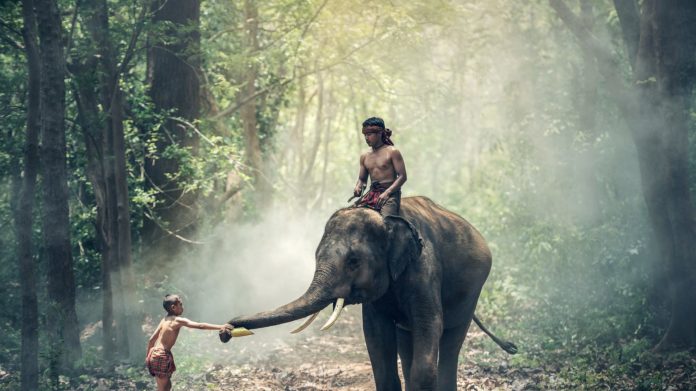 Here is one theory:

One of the princes in the Mahabharat is also a son of the Wind God and he is one of the person to whom Hanuman’s makes his appearance in this epic. This prince, named Bhima, was as mighty as the wind and had once wandered into a large banana grove, which he proceeded to randomly destroy. While tearing down fruit and uprooting trees, he saw an old monkey dozing by the wayside, its tail lying right across the grove path.

Bhima ordered the monkey to move its tail aside; the monkey opened his eyes and said it was rather weak and if the prince could be kind enough to lift it gently aside he would be grateful. Bhima, not given to either patience or conversations with lesser beings, bent to pick the monkey up by its tail, intending to hurl it across the banana trees. However, to his surprise, try as he might, he could not move even a whisker of the tail.

It transpired that the monkey was none other than Hanuman, the mightiest being on earth. “Strength should not be trifled with; neither should it be something to be vain of”, or words to similar effect, were what Hanuman told the chastened Bhima.

As a mark of affection to Bhima, Hanuman agreed to reside on the flag of Bhima’s younger brother Arjuna‘s chariot. It is for this reason that Arjuna is called Kapi-dhwaj (kapi = monkey, dhwaj = flag, kapi+dhwaj = ape-bannered). During the final terrible Mahabharat war, Arjun’s war cries were amplified by the roar that would emanate from the ape emblem on his flagstaff, driving fear into the hearts of his enemies.

Before the Kurukshetra war, Arjuna went to the Himalayas to offer prayers to Lord Shiva. On the way up He met Hanuman and during the conversation, Arjuna wanted to know how great an archer Lord Sri Ram was.

Hanuman said that Sri Ram was the greatest archer ever to which Arjuna asked:

If Sri Ram was that great an archer, why did He take help of Vanaras in building the bridge across the sea? He should have accomplished it with his arrows. Arjuna flaunted that he could easily build a bridge with his arrows.

Hanuman understood the arrogance of Arjuna and thought it would lead to his downfall in the Mahabharata war. Therefore, He decided to teach him a lesson.

Hanuman then asked Arjuna to build a bridge over a nearby pond as He wanted to see if it can take his weight. Arjuna said that this is a very simple job for him.

Hanuman then asked what if the bridge breaks?

Arjun said that he will self-immolate (kill himself by burning) if the bridge breaks, Hanuman agreed.

Arjuna built the bridge across the pond, but the moment Hanuman put a single foot on the bridge, it broke into pieces.

An ashamed Arjuna decided to end his life.

Suddenly a Sanyasi appeared there and wanted to know what was happening.

When the Sanyasi heard the story, he said that Arjuna need not self-immolate as there was no witness to the incident.

Hanuman also agreed and Arjuna built the bridge again in the presence of that Sanyasi.

This time Hanuman walked on the bridge and it did not break. When Hanuman looked under the bridge, He found a tortoise holding the bridge supporting it.

Hanuman immediately realised that the tortoise was Sri Krishna.

Sri Krishna then appeared before them in His true form and both Hanuman and Arjuna fell on his feet. Krishna says,

I am Ram, and I am Krishna. I protected your bridge from collapsing, Arjuna. May this be a lesson in humility for you. Vanity and pride undo the best of men. Dear Hanuman, you should have known better than to humiliate Arjuna. He is a fine warrior, one of the best of his times. How could you drive him into giving up his life?

Arjuna and Hanuman sought the Lord’s forgiveness and He blessed them. “As an act of remorse, I shall stabilize and protect your chariot in the great battle that is imminent”, said Hanuman.

“So be it. You shall be present on the banner of Arjuna’s chariot when he rides out to do battle in the great war of his age that is to come.”

Thus in the war Hanuman was present on the flag.

During Kurukshetra war, when Karna’s arrow hit the Arjuna Chariot, it used to shake the whole chariot. When Arjuna’s arrow hit the Karna’s chariot, Karna’s chariot used to go behind many yard because of it impact. Still Lord Krishna praised more to Karna then Arjuna. Seeing this Arjuna showed his displeasure to Lord and asked the reason as why he find Karna better than him.

In replied to Arjuna Lord said,” In your chariot, you and your heavy weapons are there, Lord Hanuman is sitting on top of your chariot, above all I myself sitting on it but still Karna could shake it. And that’s why I am praising him “Partha”.

On the last day of the Kurukshetra war, Lord Krishna asked Arjuna to step out of the chariot first. After Arjuna stepped out, Lord Krishna thanked Hanuman for being there till the end. So, Lord Hanuman bowed and left the chariot. As soon as Hanuman left, the chariot caught fire. Arjuna was amazed to see this. Lord Krishna explained to Arjuna that the chariot would have been burnt long ago if Lord Hanuman was not protecting it against the celestial weapons.

“When you roar like a lion on the battlefield, my voice shall join yours and strike terror in the hearts of your enemies. I will be there on the flag of the chariot of Arjuna. You will be victorious” words from Hanuman to Bhima.